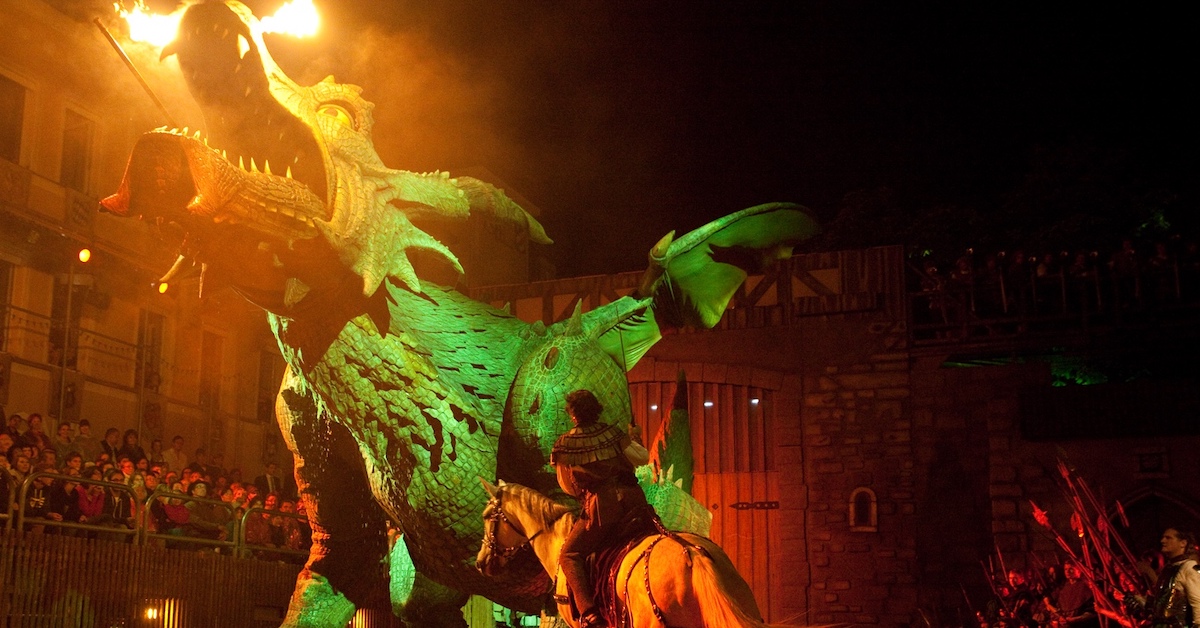 Think of events or festivals in Germany, and most likely Oktoberfest and traditional Christmas markets will come to mind first. Perhaps the various asparagus festivals, celebrating the beloved seasonal vegetable of the Germans, even come to mind. But otherwise?

Well, don’t worry. There are plenty of fun events and great festivals in Germany to plan a holiday with, some awe-inspiring, like the Kieler Woche, while others are based on history and culture. Still, some festivals are kind of weird and completely crazy, but completely hilarious.

Here are some of the best and most unusual festivals and events to experience in Germany. You can even register and participate in some. Are you in?

With a play on two words, Watt and Olympics, for German speakers, there are clues in the name of this extraordinary event. The Watt is the muddy stretch of the Elbe estuary on the German North Sea coast. It’s an intertidal zone that leaves miles of flat, muddy terrain perfect for getting, well, muddy. Add “Olympics” and voila: the Mud Olympics.

They are played each year at low tide and bring together sportsmen who do not hesitate to get dirty and have fun. Many teams from all over Germany and neighboring countries team up to play football, or similar, in the mud, get completely dirty and raise a lot of money for a cancer charity.

Pro tip: The Wadden Sea is a remarkable ecosystem well worth exploring and as long as you go with a guide and put on rubber boots you won’t even get terribly muddy or caught in the rising tide. There are wonderful little islands – the Halligen – on which you can stay to really experience this unusual terrain.

This sailing event is one of superlatives: it is not only the biggest sailing and regatta event in the world, but also the biggest summer festival in Northern Europe. The Kieler Wocheor “Kiel Week,” brings together countless classes of sailing ships, great old tall ships and everything in between, even Viking ships and classic yachts, schooners, cutters, and more.

Attracting millions of visitors throughout the week, the Windjammerparade – the parade of tall ships where around 100 tall ships sail through the bay at 11am on the second Saturday of the week – is particularly breathtaking. Add other non-sailing events – such as live music, a funfair, food stalls and more – taking place ashore and you can easily spend the whole week there.

Pro Tip: The port city of Kiel on the Baltic coast, about 60 miles northeast of Hamburg and 90 miles south of the Danish border, is an ideal hub from which to explore the northern state of Schleswig- Holstein.

Furth im Wald is right on the border between Germany and the Czech Republic, 160 km east of Nuremberg, Bavaria. Here there is a lake called Dragon Lake; the city is called Drachenstadt, or “Dragon City”; and the forest region is steeped in folklore and myths. So the clues are there.

Every year, the city reenacts the legend of St. George slaying the dragon with a festival that will thrill any dragon lover. After all, it seems dragons are found all over the world and their appeal is undeniable, although they tend to be slain. The Drachenstich, the “Dragon Slaying Festival”, not only attracts the largest walking dragon in the world, but also transforms the old town into a veritable time travel destination. Throughout the old town you will see medieval decorations, people wearing medieval costumes, parades and lots of fun to be had everywhere.

Pro Tip: The only negative point of this event, which takes place in the summer, is that you cannot combine it with the Nuremberg Christmas Market. But instead, why not go for a drink in Pilsen, the Czech city famous for its beer, some 45 miles to the east? The city is beautiful and worth spending the night there.

Hirschrufen, or deer calling in English, is an art form – apparently. Those who participate in traditional hunts know that there are many ways to imitate the cry of wild deer, thus attracting them, and then slaughtering the poor beasts. But this deer calling competition itself involves no bloodshed and instead makes you wonder why you haven’t seen anything like it in years.

Held annually in Dortmund during the Hunt and Hound fair in North Rhine-Westphalia, the competition is one of the highlights of the fair and attracts even non-hunting enthusiasts. Dressed in traditional green outfits, the various competitors pull out either cow horns or more modern funnel-like tools to compete in this centuries-old tradition.

Pro Tip: While this part of Germany is infamous for its coal and steel industry, the region is also dotted with cities such as Düsseldorf and Cologne, ideal for city breaks, as well as being a starting point for the Rhine Valley.

Bread and Games, also known as Swords, Bread and Games, is one of the largest Roman festivals in the world, taking place every 2 years in the town of Xanten, North Rhine-Westphalia , known for its Roman history. Once an expression of a politically corrupt way of taking and not giving back to ordinary people, today it focuses more on social activities in the name of history and fun.

Some 500 ‘Romans’ – be they gladiators, legionnaires, merchants or lowly citizens – descend on the town of Xanten to take part in a week-long festival of all things Roman, gladiator fights and market displays traditional games and eat the typical dishes of the time.

The 2022 event was recently canceled. But watch out for next year’s festival, currently scheduled for June 2024.

Pro tip: To keep with the Roman theme, while you’re there, don’t miss the over 180-acre Xanten Archaeological Park, home to the remains of a Roman temple and settlement.

In the southwest of Germany, in the state of Baden-Württemberg, a race with less serious competitors takes place every year in a rather picturesque setting. Competitors are small, bright yellow, and normally swim in private tubs. Since 1999, around 100 rubber ducks have swooped down the river to race in the name of charity.

But, although very cute, the race is just a good excuse to visit the old university town of Tübingen with its colorful half-timbered houses lining the Neckar river. Here you can take a boat trip or explore the old market square, the beautifully decorated 15th century town hall, the castle and the picturesque cobbled streets.

Pro tip: Tübingen is surrounded by vineyards, and it would be a shame to miss them. Why not take a tour of the surroundings and taste their best products?

In southern Germany, as well as in neighboring Austria, Almabtrieb is an annual event and festival welcoming cows, who spend the summer in the wild green meadows of the mountains. In September, they are brought back to the valleys for the winter. But it’s not just simple cows that descend into the valleys, these cows are decorated with flowers, ribbons and tasselled garlands. Their big bells are polished and rung in the villages, which are in party mode, and people line the streets to watch the cows parade.

Accompanied by traditionally dressed milkmaids and cowherds, it’s a unique parade of beautiful cows and a much-loved crop. But, if there is a herd where the animals are not trimmed, it means that one of the animals unfortunately died in the mountain.

Pro tip: These parades usually take place around St. Michael’s Day, September 29, and each village and farmer decorates their precious cows in different outfits. Try to catch the celebrations in a few different locations for variety.

Pulling someone’s finger may not seem like a sport to you and me, but to some it is indeed a very serious business. It’s even considered a martial art. Every year, in locations that change every year throughout Bavaria, the Fingerhakeln Meisterschaften (Finger Extraction Championships) take place.

They were traditionally led by men because these “fights” often originated in pubs against women, when men fought for their favor. The tradition may seem truly Bavarian, but it is indeed practiced in other countries like Norway, Denmark, Finland and further afield. Basically the fight consists of two men sitting on opposite sides of a table and they hook their middle or index fingers together, or sometimes use a strap instead, and pull. There is technique, skill and pain, but eventually an opponent is pulled across the table and loses.

Pro tip: Would you like to try it ? If you want to have a chance, you have to practice by subjecting your finger to proper training. Here are some instructions.

For more unique experiences in Germany, check out these articles:

What is a home loan and how does it work?

Mediascope launches the trend of brand activations during the festival season

A flurry of festivals and gatherings, including Stearns Wharf 150th anniversary…

County festivals are a big draw for tourists