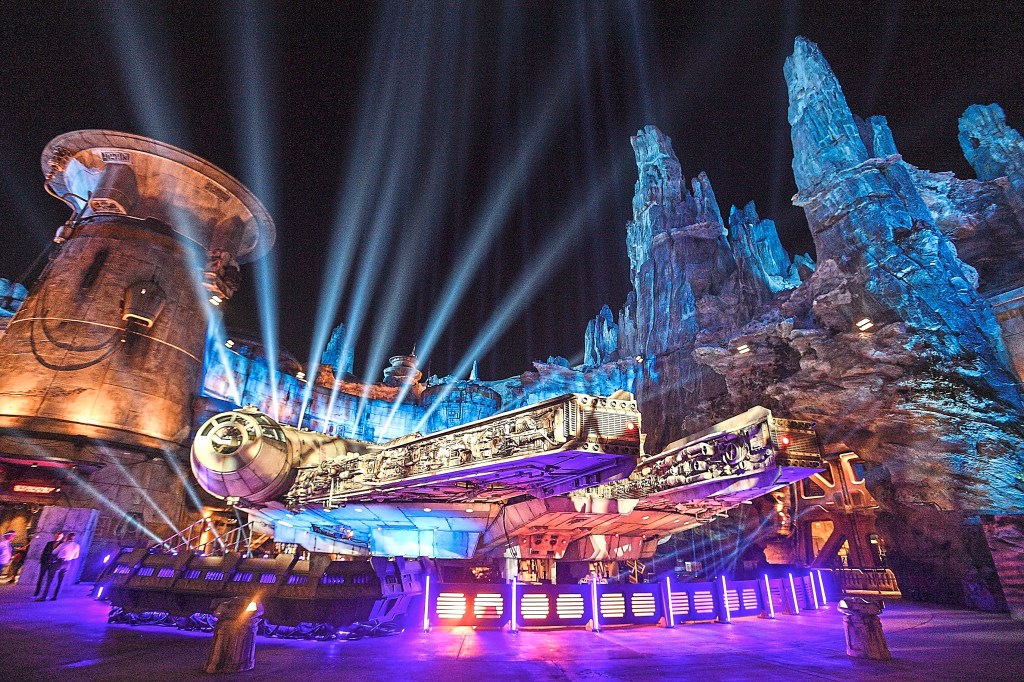 A trio of Star Wars seasonal events tied to a local Batuuan harvest festival, a delightfully bad 1970s Christmas television special and the film franchise’s unofficial May the Fourth holiday could be coming soon to the twin Galaxy’s Edge themed lands at Disneyland and Disney World.

Wait? What? Disneyland and Disney World haven’t held any festivals yet in the new Star Wars lands. Easter Eggs cleverly woven into a new Batuu travel guide offer hints of what may lay ahead for the Star Wars: Galaxy’s Edge themed lands.

The new â€œTraveler’s Guide to Batuuâ€ from Lucasfilm and Walt Disney Imagineering serves as an in-world travel guide to the Black Spire Outpost village on the Star Wars planet of Batuu, the setting for the 14-acre lands at Disneyland in Anaheim and Disney’s Hollywood Studios in Florida.

The three local Batuuan festivals in the Spring, Fall and Winter are â€œmajor annual holidaysâ€ with unique traditions, according to the â€œTraveler’s Guide to Batuu.â€

Black Spire Day just happens to be celebrated each year on May the Fourth as a way to commemorate the founding of the outpost.

â€œOn this happy holiday locals decorate the outpost with pieces like colorful tarps, ribbons and flowers,â€ according to the â€œTraveler’s Guide to Batuu.â€ â€œLocals sing traditional songs, feast and tie wishes to the Trilon tree. Sometimes the evening ends in a procession through the outpost with a fireworks display. â€

Disneyland has already hosted May the Fourth events – a play on â€œMay the Force be with you.â€

Disneyland brought back the Hyperspace Mountain roller coaster overlay, marched a legion of stormtroopers into Tomorrowland, rolled out Dark Side and Light Side themed food and sold Star Wars novelty collectibles to celebrate May the Fourth in 2019.

SEE ALSO: Will Disneyland offer discount tickets for locals when the park reopens?

The Batuuan Harvest Festival celebrated each fall honors the fictional planet’s most valuable natural resource, golden lichen, or â€œgold dustâ€ as the locals call it, according to the book.

â€œOnly during this festival does crime boss Oga Garra consider allowing her valuable commodity of golden lichen to be used in special drinks and dishes,â€ according to the â€œTraveler’s Guide to Batuu.â€ â€œThe outpost itself is decorated in golden hued banners streamers and locals have been known to enhance their garb with similar colors.â€

Several planets in the Star Wars galaxy celebrate some version of a Harvest Festival or something similar to Thanksgiving.

Jar-Jar Binks and the Gungans on the Star Wars planet of Naboo give thanks to their deities on Munchen, a special day also known as the Sacred Feast or Great Feast.

The Ewoks are always looking for any excuse to throw a party on the forest moon of Endor. The teddy bear-like hunter-gatherers have a Harvest Festival and a Harvest Moon Feast.

Hosnian Prime, the capital of the New Republic, celebrates the beginning of Autumn with sunsail races on Equinox Day.

Life Day traces its roots back to the Wookiee planet of Kashyyyk with an annual holiday that has been embraced across the Star Wars galaxy.

â€œOn Batuu, locals celebrate the ideals of peace, harmony and freedom for all beings no matter how different they may appear,â€ according to the â€œTraveler’s Guide to Batuu.â€ â€œFestive decor can be seen throughout Batuu and at the close of Life Day everyone gathers around the black spire to sing songs and spread good cheer to one another.â€

Most Star Wars fans are familiar with Life Day through the delightfully bad 1978 â€œStar Wars Holiday Special.â€ Chewbacca and Han Solo spent time with the Wookiee’s family during Life Day on the television show. The new â€œMandalorianâ€ series on Disney + calls out Life Day in the opening episode.

The holiday celebrates the life-giving and life-affirming powers of the Tree of Life, according to StarWars.com. During the Life Day holiday season, Wookiees dressed in traditional red dresses gather around a trimmed tree and exchange gifts with relatives.

The annual celebration is filled with fireworks, festive music and holiday treats like Wookiee-ookiees and Hoth chocolate. Figrin D’an and the Modal Nodes, the alien house band from the Mos Eisley cantina in the original â€œStar Warsâ€ movie, have been known to play special Life Day concerts.

Life Day would be a natural fit for Galaxy’s Edge. Black Spire Outpost is named for the petrified trees that dot the village. A young tree growing in the middle of the spaceport represents rebirth and new life.

The new â€œTraveler’s Guide to Batuuâ€ offers recommendations on where to eat, shop and sight see during a visit to Galaxy’s Edge while providing backstories for the characters and locations in the Star Wars themed land.

The â€œTraveler’s Guide to Batuuâ€ is ostensibly penned by Eloc Throno, a galactic historian and travel writer who has also written guides to Tatooine, Mustafar and other Star Wars destinations. Eloc Throno is an anagram and Star Wars pen name for author Cole Horton. The book also credits Lucasfilm creative executives Pablo Hidalgo and Matt Martin and Walt Disney Imagineering managing story editor Margaret Kerrison – who all had a hand in developing the backstory for Galaxy’s Edge.