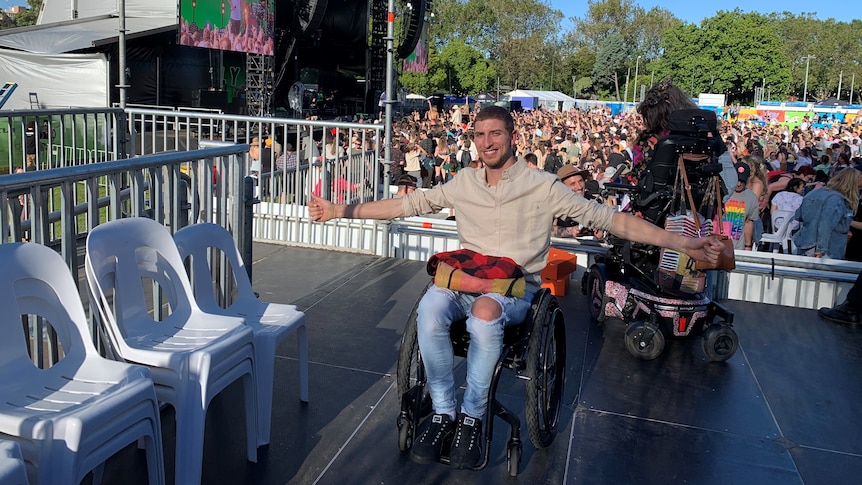 Before he could crawl, Jacob Cremen-Darkin had already got his hands on his father’s guitar. For him, music is a universal language. His favorite memory is when he got to play on a grand piano during eighth grade for the graduating class.

“I guess before, I really took a lot of things for granted,” he said.

In 2019, the Parramatta man broke his neck doing a front flip. Landing on his head, Mr Cremen-Darkin crushed his spinal cord and spent the next nine months in hospital.

But it wasn’t long before he started considering going to concerts again, realizing how difficult it would be.

“Just being able to tip over, not worrying about accessibility, having a place where I could see the actual show, not having to think about the bathroom because I could go anywhere…I wouldn’t have thinking about it.”

Jacob is not alone: ​​4.4 million Australians live with some form of disability, or 17.7% of the population. But having a disability doesn’t mean you can’t enjoy music.

People with disabilities across the country report issues with accessible seating sections, segregation of regular concertgoers, or something blocking their direct line of sight.

Similarly, many report difficulty participating in VIP experiences and are often deterred from purchasing them due to inaccessibility.

Most of the time, Ms. David says she will pay for a seat in the gold section, but the ticketing company will assign her to a non-wheelchair accessible seat.

“I arrived at the venue, but there is no wheelchair space because they give you tickets to places that have a seat…they have to move you, and sometimes they will move you to a place that is [worth] less monetary value,” says David.

“They will relocate me to the silver or bronze zones, but I am not getting the [refund] return.”

Rock legend Jimmy Barnes says the problem of inaccessibility not only affects fans with disabilities, but artists living with disabilities as well. He says he’s lucky to have his daughter Elly-May, who has cerebral palsy, tour with him frequently.

“We found that most venues hadn’t given enough thought to accessibility… With a lot of help from our route and production teams, we were able to make Elly-May’s travels a bit easier But even with all that help is still difficult.”

Having seen firsthand the lack of backstage access while performing, the Working Class Man singer says he’d like to see “a lot more consideration for everyone” when it comes to building the back and l front of performance halls, especially with “stairs and sight lines.”

“I know going backstage opens Elly-May up to a lot of different issues, including. I often see a disabled section of a room somewhere in the back in the nosebleed section of a room. Disabled fans pay the same price and are entitled to the same benefits as everyone else… The experience is not the same when the group you see is so far away that they look like ants.

When Xena Greenwood moved to the Victoria area, her enjoyment of the arts was diminished due to the inability to access many places.

One of his local performance halls has two theaters, the most used being located at the top of a flight of stairs.

There have been several times where Ms Greenwood has not even been able to enter a building, or she has had to pay triple the amount of tickets for shows because the only accessible seating area exists in the upper tier ticket allocation .

When Ms Greenwood brought up the issues, she was called ‘whiner’ and ‘authoritative’.

“[Older generations] haven’t grown up with people like us, haven’t seen us in the community, and they’re just not making that mental shift.”

Currently working at a tech start-up to connect young adults to the right mental health professional, Cremen-Darkin knows the importance of finding the right person to help them.

With Hireup’s help, Mr Cremen-Darkin was able to find a carer and attend Ability Fest, Australia’s first and only fully inclusive music festival.

“When I got to the entrance, they had a path laid out on the grass with this special plastic mat. It was just nice to know that they [people with disability] were the majority for a change. And they should be treated as if they were important. It was really nice to see.

“I was listening to music, I was having fun, and so was everyone. And in that moment, I felt like there was no separation and there was no had no discrimination.”

Andrew Thomas, a Hireup representative, says there are many ways festivals and events can become more inclusive for everyone.

“Having viewing platforms so that festival-goers are part of the event and not hidden to the side, accessible toilets, quiet areas, paths if the event is on an uneven surface and to create a way to negotiate crowds, reduce the use of strobe light, have an Auslan interpreter.”

According to Thomas, these are just some of the simple and effective steps festival organizers can take to make their event more accessible.

“It really opened my eyes to what we can do better,” says Cremen-Darkin.

A country ahead of Australia with an impressive program for festival-goers of all levels is the United Kingdom.

Attitude is Everything is a disability-led charity working in partnership with the disability community and industry to make festivals more accessible and inclusive.

Suzanne Bull is the founder of Attitude is Everything and says the changes brought about by the organization would not have been possible without its volunteers.

“We asked people with disabilities to volunteer, acting as our ‘mystery shoppers’ who frequent venues and festivals and collect feedback about their experiences as customers at events…This is given to promoters and to managers in a structured way so that they can make improvements.”

This tactic also provides evidence to policy makers and business bodies on barriers and solutions to improving access to major festivals and campgrounds.

Ms Bull says they have received positive support from the disability community who trust Attitude is Everything to represent them appropriately and resolve issues on their behalf.

“Equally, we have the trust and respect of the music and live event industries who know we are here to help them offer support and guidance. To be valued by both the disability community and industry sectors is important and not something achievable by every organization,” she says.

In 2014, Attitude is Everything was commissioned by the Equal Opportunities Council and the Norwegian Live Music Association to develop a franchise model of their Best Practice Charter for Norway.

“We talked about the project at industry events, provided training, conducted site visits…and worked with people with disabilities in Norway to develop a model.”

The experience has placed them in a strong position to engage with other countries that wish to implement the highly successful model. Recently the charity has started working with various arts organizations across Australia.

Ms Bull says they are supporting a project to map the provision of access to sites and their websites in Sydney. She hopes it will spread to Victoria as well.

They are also in contact with Arts Access Australia as they consider options for a national program to promote accessibility in the arts.

With COVID19 changing the way festivals are organised, organizers may be more inclined to work with the disability community to find a solution that benefits everyone involved.

“I think [festival organisers] need to have someone with a disability or lived experience… sitting on board, decision makers or events… We should not discriminate. [We] shouldn’t be an afterthought,” says Cremen-Darkin.

“I think people are only just beginning to realize that people with disabilities have a right to… accessibility to arts and cultural events… It’s very frustrating because arts, music, theater, everything it really broadens your horizon,” Ms. Greenwood said. said.