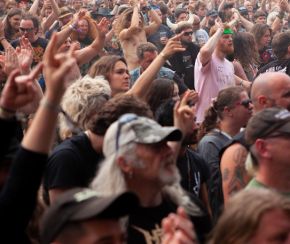 Well, it was moving!

After the last 18 months of hell, no festivals last year, and the possibility that it might not happen again this year if there had been an extension of the lockdown rules, Bloodstock Open Air has finally opened its doors and hosted the whole family for a truly unforgettable celebration of their delayed 20th birthday.

Fans crowded the site on Wednesday with wild excitement at the prospect of experiencing their first festival in two years and the emotion was clear to see on everyone’s unmasked faces. With Covid affecting everyone over the past 2 years, it was amazing to see people having fun with reckless abandon for once.

Covid’s only influence was on the line-up, with a handful of bands unable to show up and perform, but those who were able to replace them both showed up and stepped up and though it must have been frustrating for those groups that their plans were ruined, all went well.

Thursday was the occasion to see bands on the New Blood and SOPHIE stages with incredible sets like Slavesteel and The Crawling from Northern Ireland. But the star was Punk Rock Factory which, replacing Hacktivist, brought high-energy punk rock versions of classic TV and movie themes. Seeing a tent full of gnarled metalheads sing along to hits from Frozen or Moana is by far one of the best things you can witness.

Friday got off to a good start with Fetal Juice opening the main stage with a bang, but it wasn’t until the early afternoon, in scorching heat, that things got really lively with the arrival on stage of the British thrash legends Acid Reign. They suffered a few technical issues but made the most of it with leader H making jokes and entertaining the crowd who gobbled up everything.

The disappointment to learn that Loathe had been forced to step down was clear, but it didn’t last long when hardcore Leeds group Higher Power took to the stage. They were a revelation. On the surface they seem a little cool and nervous for Bloodstock, but they absolutely pulled off their set and made a lot of new fans. “It’s good to be back in a domain with a bunch of monsters like us.” mischievous singer Jimmy Wizard said.

From then on, it was pretty much just a big party.

The sun was shining, the beers were flowing, and it was the perfect time for The Wildhearts to take the stage. They all seemed to be having a blast singing riff after riff with classics like Everlone, I Wanna Go Where the People Go and Caffeine Bomb causing absolute chaos in the crowd. After the technical issues that made their Download Pilot set fail, it felt like a bit of redemption – not that they needed it – but they had to be gutted from what happened in Donington, so crash their set and getting an amazing response must have felt good. .

There aren’t many bands that can keep up with a set of Wildhearts like the one they played, but if anyone can do it, Skindred can do it, and they absolutely crushed him out of the park. Benji’s incredible stage outfit wasn’t the only thing that got the whole group on fire, and who can’t love Newport’s helicopter show? Their whole show is built around celebrating the music and the crowd bouncing around and everything went smoothly from the moment Darth Vader led Benji onto the stage until they left with a warning ringing in. all ears, but the beautifully poignant Saying it Now was a big highlight of the set.

It appears that Devin Townsend made the biggest sacrifice to be able to perform this show, having come to the UK very early, quarantined until the event and only performed a warm-up show with the mercenaries whom he had only met in real life the day before. He played an epic career spanning a fan-chosen roster on demand that had the level of insanity you would expect from a man who had locked himself in a Manchester hotel room for the past 14 days.

As Devin said, his year has been a little odd, but horn-wielding gorillas, a drum elephant, and a guitar battle with Ziltoid the Omniscient didn’t seem out of place in Devin’s crazy world at all. A nice touch to close the show saw Devin present BOA organizers with a special birthday cake.

Saturday was skewed towards the heavier and more extreme side of things and the Borstal openers, playing their very first show, started things off brilliantly. They looked brutal and will be one to watch out for. Wargasm was a late call-in to replace Jinjer and was scheduled to play on Sunday but helped by playing early on Saturday. They brought a bag full of exuberance on stage and were pleasant with a fresh and energetic set.

The energy was taken several hundred notches when While She Sleeps put on a headlining show at their afternoon set. They absolutely clubbed the audience for almost an hour. You would never know that Leader Loz was suffering from the aftermath of Covid as he launched himself around the stage, into the crowd, and ultimately into the sound tower at the back of the arena. An incredible set that claimed their return much higher in the future.

What’s amazing about Bloodstock is how much they support new music and dedicate a whole scene to it. Add to that the audience’s willingness to discover new music and you will always find it full, and you will always find a new favorite band somewhere over the weekend. Hawxx must be there for a lot of people because they absolutely killed him with their mid-afternoon set.

Paradise Lost delivered a flawless production of their 1995 album Draconian Times which was all the more impressive given that Nick Holmes apparently had a local cab driver whispering in his ear throughout filming.

The Kreator headliners were the epitome of German efficiency, giving the main stage an absolute kick with their ‘ein-zwei-drie’ accounts and classic thrash bangers. A touching tribute to all of the fallen rockers from last year was a nice touch and a Dani Filth cameo for Betrayer was another highlight.

Sunday saw many of the band’s birthdays coincide with Bloodstock’s 20th anniversary. Orange Goblin who played the very first BOA festival celebrating their 25th birthday, Saxon 40, and headliners Judas Priest their 50th gold and even with a downpour during Saxon’s set, the atmosphere never changed. soggy. As Vicky told me, she thought the weather was the big thing because it had been beautiful all weekend.

The start of Sunday was a wonderful way to start the day with an ensemble of relaxing Viking music played on traditional instruments as the trio were joined by painted ladies for a low-key roaring fire. A perfect start to the last day of the festival.

No one across the entire festival site over the 5 days looked as excited to be back as giant Orange Goblin frontman Ben Ward. They brought the groove to Catton Park and looked like they were having fun doing it. This is the kind of band you need to buy 6 pints to keep with you so you don’t have to visit the bar while they’re on.

Living legend Brian Blessed appeared on the main stage to introduce Saxon and really rocked the crowd with just 2 wordsâ€¦ Gordon’s aliiiiiiive! It looked like he was a little surprised by the response from the BOA crowd, but the love they showed him drowned him unbelievably. Throwing himself into a bit of Shakespeare, he hilariously began to walk off the stage forgetting to introduce Saxon but quickly made amends.

Biff Byford has felt just as good since his first kiss apparently, but BOA mainstays Saxon celebrated their 40th anniversary in gorgeous style by rolling out the hits. Wheels of Steel was accompanied by the wonderful view of a wheelchair surfer and they closed the set with 747 and Princess of the Night, but in the meantime they rolled back the years and seemed to be enjoying every moment of their time on scene.

Judas Priest’s 2018 headline at Bloodstock was their last UK show, and truth be told, looking back it was a bit lackluster. Tonight’s return was far from it. The band and Rob Halford in particular looked much more ready than before and they delivered a set of deep cuts and unexpected classics with the One Shot at Glory opening never played live before.

Resplendent in gold studded black leather, Rob walked around the stage and interacted with the crowd, who were delighted. It was a set that showed everyone exactly why they were metal legends with 50 years under their bullet belts.

Bloodstock 2021 was like starving for a week and then going to ham on the all-you-can-eat buffet. It was more the fact that it happened than what happened, and it’s probably true that you could have dropped the same 20,000 people in a field with no music and they still would have had one. Huge explosion all by themselves, but Bloodstock is a family matter and this reunion, however long it was, was a complete success. Schmandemic pandemic it was a fandemic.

Massive cries must go to all the organizers. Vicky Hungerford, Adam Gregory and their entire team from top to bottom put on a show that meant so much more to people than it would have at any other time.

Plans are already under full steam for next year’s rally, with headliners Mercyful Fate and Lamb of God already announced. We’ll see you on the battlefield for a new celebration of heavy culture.

To see a full gallery of an amazing weekend, click here