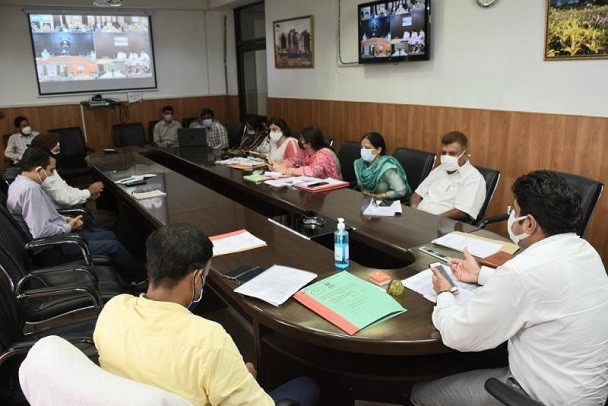 JAMMU, SEPTEMBER 09: Divisional Commissioner Dr Raghav Langer today called on Deputy Commissioners to formulate action plans in consultation with all stakeholders for the promotion of traditional and cultural festivals that are part of the rich heritage and of the composite culture of Jammu and Kashmir.

He issued these directives while chairing a meeting of deputy commissioners and heads of relevant departments to discuss the implementation of this promotional program.

During the meeting, officials from the Tourism Department made a detailed powerpoint presentation on the already identified / existing festivals that are being held in the districts of the division.

He was informed that no less than 80 traditional and cultural festivals have been identified in the districts of Jammu Division, including 4 in Jammu district, 15 in Kishtwar, 9 in Samba, 2 in Kathua, 10 in Poonch, 8 in Rajouri, 7 in Reasi, 3 in Ramban, 6 in Doda and 16 in Udhampur.

Tourism officials informed that these traditional / cultural festivals are held at different months of the year.

The Division Commissioner asked the CDs to submit a revised list of festivals / cultural events along with the significance of each activity and photographs of it.

The Div Com also reviewed the progress of the selection of tourist villages by the districts and the identification of ancient temples / mosques / gurdwaras / churches for restoration works to improve the potential for heritage tourism in the region.

The Div Com stated that the office of the lieutenant governor has already issued orders / instructions for the preparation of action plans under the “Scheme for Revitalization, Restoration, Preservation and Maintenance of Architecture and heritage ”.

He was informed that the objectives of the program are to identify sacred places and heritage sites requiring interventions to carry out their renewal, restoration and renovation; ensure the protection and sustainability of these places and promote restoration wherever damage has been suffered by these places.

The government has also established committees at the division and district levels for effective program implementation.

The Division Commissioner asked DCs to review the list and submit a revised list of religious places, historic monuments in need of restoration as well as brief descriptions of the location, significance and photographs of the location and priorities of the flag. .

While reviewing the progress of identifying locations for tourist villages, it was informed that the process is ongoing. However, some districts like Udhampur have submitted locations and the Udhampur district administration has started to work to meet basic field requirements.

The Div Com has asked DCs to finalize the process and submit the final lists on a priority basis.

The meeting was attended by the Director of Tourism, Chief Engineer, JPDCL, Additional Secretary, Academy of Arts, Culture and Languages; In addition to the officers of the Archives Department and other relevant persons, while the Deputy Commissioners of the Jammu Division as well as other relevant officers participated in the meeting by videoconference.