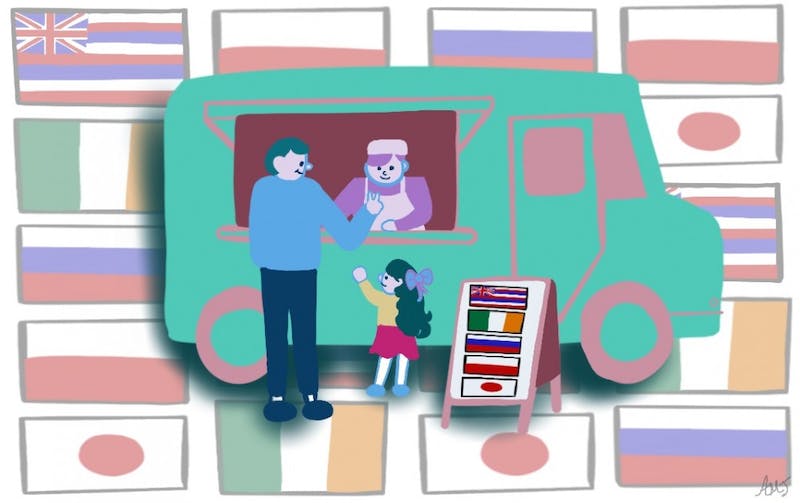 Five cultural festivals around ASU campuses in Phoenix and Tempe

â€œStudents have a wide array of cultural food festivals to look forward to this spring,â€ Illustration published on Wednesday, February 20, 2019.

Whether you’re missing out on the flavors of home or looking to experience something new, cultural festivals are a great way to get out into the community and have a great time, while tasting amazing food.

This spring there are a number of cultural festivals with a range of food and drink to enjoy. Although they are primarily in downtown Phoenix, food lovers of all campuses certainly won’t want to miss out on these unique experiences.

This year marks the 35th Arizona Matsuri: Festival of Japan. Matsuri, which translates to â€œfestivalâ€ in Japanese, focuses on art, music, dance and food and offers non-stop entertainment on four stages. While there will be traditional dances, there will also be martial arts, haiku poetry, taiko drumming and storytelling.

â€œThe festival itself started at ASU with a group of students passionate about Japanese culture, sharing what they had to offer around this time, and it continues year after year,â€ said John Sachen, member of the festival’s steering committee.

The festival will be full of food stalls and vendors offering familiar dishes like teriyaki chicken, ramen noodles, and crushed ice. As for drinks, a beer and sake garden is offered to over 21s. For a small fee there will also be a traditional Japanese tea ceremony.

For those looking for a more interesting dining experience, try takoyaki, a round snack filled with octopus that Sachen says is â€œgooey and chewyâ€ and worth trying.

The 16th annual Polish festival, held outside of Our Lady of Czestochowa Parish in Phoenix, invites community members to experience Polish culture and tradition through music, dance and food.

Dave Bonczkiewicz is a member of the Pulaski Club, a Polish-American social club in Phoenix. The club is an active seller of the Polish festival, and Bonczkiewicz said from his experience with the festival that the food is always “very tasty and very delicious”.

â€œThey’re going to have pierogies, which are like Polish dumplings, and they’re filled with meat, sauerkraut or cheese,â€ he said. “Then they have the stuffed cabbage rolls, and the Polish ladies make them by hand over there in the church.”

A combo plate is also offered for those who want to taste a bit of everything, which includes pierogi, cabbage roll, sausage and potato pancakes. There will also be Polish beer and a variety of cakes and pastries.

Bonczkiewicz said that overall, the festival allows Americans to experience “what Poland is”.

â€œYou go there one day and you meet so many different people not only from the Polish community but from different states,â€ Bonczkiewicz said. â€œYou have a great time from start to finish. “

Russian culture comes to life at the Arizona Russian Festival at Enchanted Island Amusement Park, which showcases the music, dance, art, culture and cuisine of Russian and Eastern European communities.

While viewing Russian folk costumes and participating in traditional activities, participants will also be able to try hearty soups, such as Ukha, a Russian fish soup.

â€œOne of our all-time favorites is Russian borsh,â€ said Julie Stepanova, president of the Arizona Russian Festival. “It’s a kind of vegetable soup with a lot of vegetables like carrots and beets.”

People from other cities and even other states come to the festival, Stepanova said, because it is one of the only Russian festivals in Arizona.

â€œThere is so much culture that we can introduce and familiarize Americans with,â€ she said.

The South Pacific Islands are celebrated in great shape at the Arizona Aloha Festival at Tempe Beach Park, where visitors can take in traditional performances, such as dancing, and enjoy a colorful island market.

â€œThe South Pacific is a mixture of cultures,â€ said Lacretia Bacon, president of the festival. “It’s really the crossroads of the Pacific, so a lot of the food some would call ‘fusion’.”

The festival features some of the “basics,” like teriyaki chicken, Bacon said. But it also offers huli-huli chicken, which is a type of grilled chicken, she said.

The ‘plate meal’ is also a staple of this festival and includes rice, macaroni salad, and Kalua pork or teriyaki chicken, all with an island twist.

In addition to great food and festivities, the Arizona Aloha Festival is within walking distance of ASU’s Tempe campus and the organization invites students to volunteer for the event.

Don’t forget to wear green as the community celebrates all things Irish at the 36th Annual St. Patrick’s Day Parade and Fair at the Irish Cultural Center in Margaret T. Hance Park.

This dog-friendly festival will begin with a parade of festive floats, marching bands, artists, Irish dancers and bagpipes. After the parade, participants can enjoy traditional Irish music, Celtic rock and tap dancing performed on four different stages. There will also be stalls filled with merchandise, food and drink.

The flavors of Irish cuisine are celebrated with fish and chips, burgers, giant bratwurst, ribbon fries, fried bread, funnel cakes and cold drinks, including a diverse selection of beers.

â€œWe have a bit of everything for everyone,â€ said Mary Moriarty, Treasurer and Fair Chair. “Sadly, the Irish are stereotyped as too much drinking, and we want people to see that there is so much more to Irish culture than drink, elves and potatoes.”

For an additional fee there will also be an Irish tea and coffee ceremony as well as a variety of baked goods such as scones and soda bread. It will include a brief lesson on the history of tea in Ireland.

â€œThe United States is a melting pot and Arizona is a melting pot,â€ Moriarty said. “We have to celebrate all the cultures that came together to create this country and this state, and that is the beauty of it.”