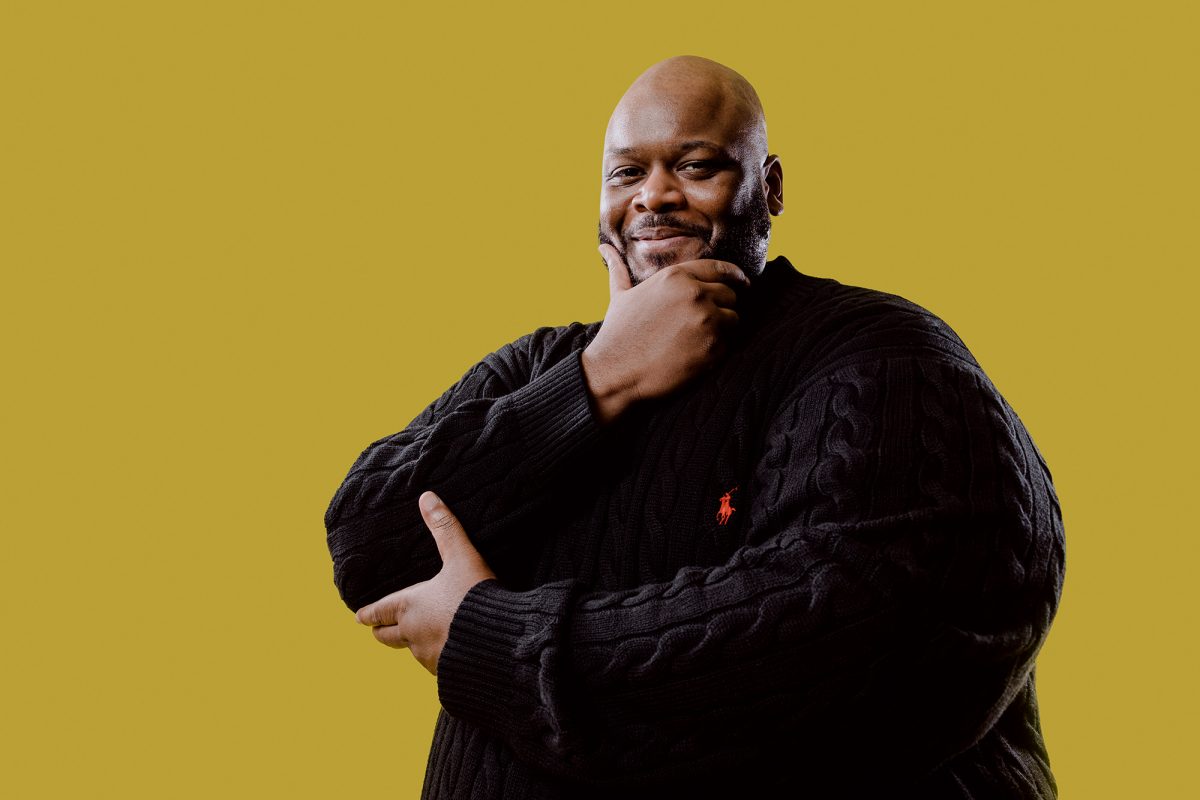 Ron Dillard Jr. does it all. He writes his own plays and screenplays. He has TV shows in his head ready to go out into the world. A storyteller must have stories to tell, and Ron is ready to tell his. Finding his way in the film world and finding an audience hasn’t been easy, but to hear him say it is all part of the plan.

Ron Dillard Jr.: I’m a screenwriter, director, producer, actor, I was born in Petersburg, Virginia, I moved to Richmond, Virginia in 2004. I have a background in theater and started doing church plays and in high school. When I went to college, I got into acting, producing and directing plays, and then started Ron Winston Entertainment.

I knew there was a lot of theater going on in Richmond. There were a lot of stories told, but from the perspective of the 1800s. I had these story ideas about today and how we treat each other. Stories that I really wanted to dive into and give myself the opportunity to play characters that I don’t think other people would have thrown me into.

That’s how I started where we are now.

Richard Anthony Harris: And what was your first short film? Where to play?

garden: The first piece I played with my company dates back to 2008. It was called I deserve better and it was about domestic violence. It’s not a new topic, but I don’t want to do a production unless I can bring something different to it.

In I deserve betterwe have seen the abused [person’s] prospect as to why she stays, and the abuser as to why he does. Not so much to give them a pass – there’s no excuse for that – but understanding why someone is doing something can give you a key to hopefully help them. In this story, we find the paternal aspect, because 70% of men who abuse women have seen [abuse] in their childhood. He saw him grow.

In this production, the father is now reformed and attempts to discipline his son. His son is like, “How dare you? You taught me to be who I am right now. So that was an interesting dynamic that we presented with really good results.

RHA: Is it difficult to take a play and turn it into a film?

garden: I haven’t taken one of my plays to make a film yet, but what I wanted to do with this play is to make a mini-series. I basically want to do it where we tell three generations of stories in two episodes, so it’s not hard when you have perspective.

RHA: When you started getting into film, did you have a lot of support? What was the process of “I’m going to start making movies”? Was it hard to do in Richmond?

garden: For me, I have a great, great team that has worked with me since I was doing my theatrical productions. It wasn’t really until I met a young man named Shirod Green and associated with him. I needed someone to be the director of photography, to do the lighting and the shots, someone to edit the films, because that’s something I’m not into specialized.

I discovered Shirod thanks to Kelli Lemon. She did an article on The Art Of Noise and she tagged Shirod Green. I checked his Instagram account, I looked at his website and I contacted him to see if he would agree to meet me. Fortunately, he made an appointment with me, and I told him about these short films that I want to do. I explained to him how I wanted to premiere them – I want to take them to film festivals – and where I wanted to go. After that meeting, we kept in touch, and he finally said he would come back and work on it.

Once I got that in place, I felt confident that we could go and make those four movies. I felt we could have a lot of success with them.

RHA: What is the biggest obstacle to releasing your films in a city like Richmond, and finding an audience?

I remember a woman giving me feedback because she saw the ads. She loved the commercials but didn’t know anyone in the room, so she didn’t come. Having a name attached to the project is something I understood to be a problem. He is the biggest detractor of the Richmond market.

RHA: Well, it seems to me that you take them out. I would like to congratulate you for presenting three of your films at film festivals around the world.

garden: Yes thank you. We’re very, very lucky to have all three movies at the same film festivals multiple times. We have been lucky enough to win over 30 awards now. We have won national and international awards. These films were screened in Europe and in places like India, Brazil. Anywhere in the United States. We’ve been really, really lucky with the reception of those films.

RHA: I’m really curious, how is it to talk to the organizers of a film festival in Turkey? In places where English is not spoken, do you feel your ideas coming to fruition?

garden: You know, it’s interesting that after we went to our first 15 festivals, we started having other film festivals like India, Turkey, Hong Kong, Japan, which were actually asking us to going into their festivals, which was so overwhelming.

And the way we were able to communicate even in different languages ​​was amazing, because some of the film festivals we won are in another language. The good thing is that we have films that communicate really well, when you watch them – whether you can follow them in English, or if you have to have a translator.

RHA: It’s amazing, Ron, I think, you know, just following your story, it’s amazing that you’re all over the world. Does it occur to you, as a black filmmaker, that you might be opening doors for other black filmmakers in that local market?

garden: I never thought of it like that as a black man, from a black perspective only, because I look at Steven Spielberg, David Fincher, I look at directors who are very good at what they do .

My favorite director is Ridley Scott, and I’ve never looked at him and said, “Hey, he’s a competent Englishman!” I consider him a director who taught me a lot, and if I see his films, I’m going to have a great story. I know he’s a master craftsman, and that’s what I’m trying to do.

I am a director. First, I’m a good storyteller. And that’s how I want my brand to be known, when Ronald Dillard, Jr. makes a movie or tells a story, it’s going to be good. It’s gonna be something interesting. That’s what I’m working towards, to make sure that’s what people expect of me.

RHA: You are a storyteller.

garden: Absolutely. When you think of When we exploit them, it deals with one of the worst issues with many black men being killed by police officers. It’s something very, very specific in the film that I couldn’t turn away from. I had to find a way to do it. And we were able to do that. Again, it’s all in the story. It’s wrong to take lives when you don’t have to, or just to take lives so irresponsibly.

So that’s the general point of this movie, hope it brings humanity back to people when they think about life. At least, that’s what I hope.

RHA: What themes do you return to in your films and what do you try to understand?

garden: I see a common theme in all my films. Often people who are pushed around or ignored, or often take to the high road, have their say. [I hope] to make my audience really think about how they treat their fellow man. And I hope that in my plays or my movies, I’ll stop for a moment, I hope to generate a conversation and say, “Hey, am I like that? Am I describing this? Often, unless it affects them personally, most people don’t care. But being able to sit down and let this fictional character give us a chance to think about ourselves and what we could do better, how we can be better – what’s better than that?

RAH: As an independent filmmaker in Richmond, do you feel like you get enough support here? Are there enough teams, actors and professionals to help you?

garden: There was a time when I didn’t feel like there was much support but now I watch it because it’s my fault. The way I approach it now is, number one, I have to go out and meet people. I have to get out here and make sure I meet people, be active and know who is available.

RHA: My last question for you is, in terms of your career, what excites you this year?

garden: This year, I have three TV shows that I created, and I’m starting to have meetings to pitch. I’m looking to transition into racing on TV.

It was a chance to make great movies and hopefully attract conversation, but then show off my talent for telling more than one story – being more than a one-trick pony. This means you can put stories together again and again, as it’s one of the things you’ll need to make TV.

RHA: Do you have another movie coming up?

garden: We have just finished a film called unbrotherly love, marked by Ireland. So we’re looking at that and hopefully starting to bring it into some film festivals. And that’s going to be another movie that we’re looking to distribute, with It’s the color of your eyes, A monsterand When we exploit them.

RHA: Ron, that’s amazing. I just want to thank you for taking the time to talk to me today.

garden: Thank you very much for asking.