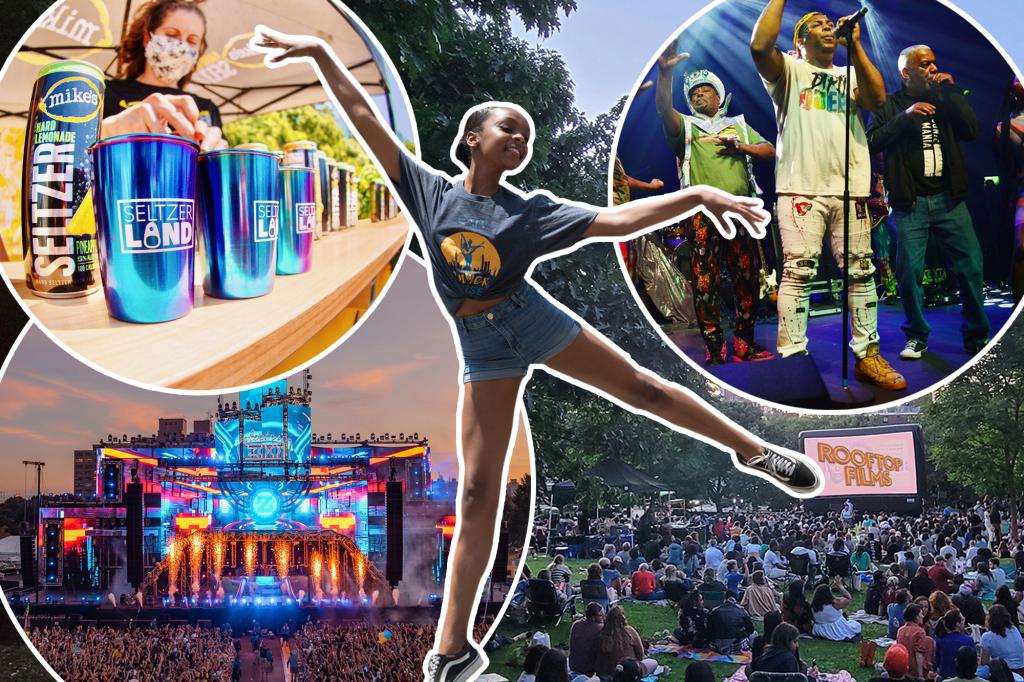 When the asphalt begins to sizzle, some New Yorkers flee, others festi-vizzle.

After two years of COVID — and a long winter — New Yorkers are ready to shed their diapers and bask in the sun. And open-air festivals are flourishing again in the five boroughs.

The Post has selected the best of these festivals of theatre, music, film, food and more.

From the ever-enchanting Shakespeare in the Park to hard seltzer spritzes to musical parties with hot lineups featuring Kid Cudi, Herbie Hancock and Blondie, this summer has plenty to do.

So do like the Beastie Boys and “Ch-Check it out”.

Long ago – even before the Williams sisters were born – Forest Hill Stadium hosted the US Open tennis tournament. Today, its bucolic setting and country-club atmosphere make it a magical musical getaway. This season’s lineup features an eclectic assortment of acts for music fans of all tastes. The series kicks off with Grammy-winning indie folk Bon Iver on June 3, then Led Zeppelin god Robert Plant and bluegrass queen Alison Krauss form a roots duo on June 4. Australian electronic trio Rüfüs du Sol will bring the beats on June 10 and 11, while indie rocker Phoebe Bridgers will get the crowds pumping on June 16. Later in the summer, Norah Jones will light up the stage on August 4, and Queens’ own LL Cool J will headline her hip-hop Rock the Bells. hop festival on august 6th.

The Rooftop at Pier 17 Concert Series

In just its fourth season, this South Street Seaport venue has become a summer musical paradise, with the Brooklyn Bridge providing the scenic backdrop for an array of artists to create serious sound waves. Among the artists moored at Pier 17 this year are singer-songwriter Vance Joy on June 4, reggae band Rebelution on June 15 and rapper Pusha T – who recently debuted at No. 1 on the Billboard 200 with their new album, “It’s Almost Dry” – on June 16. July highlights include Australian pop-rock band 5 Seconds of Summer on July 12 and 13, and a night of new-wave nostalgia with the Psychedelic Furs on July 15. Then August heats up with buzzy indie artist Girl in Red on August 2, Elvis Costello & the Imposters on August 11, and downtown New York legends Blondie on August 17-18.

This year, New York’s biggest electronic music festival is putting technology to the test with a Web 3.0 theme. In another technological twist, the festival will accept crypto payments. But one thing remains the same: the DJs, who will have the masses spinning on Randall’s Island Park over Labor Day weekend. Dutch DJ Martin Garrix – who was the most requested spinner in fan polls – will lead a packed line-up that also includes Diplo, DJ Snake, Armin Van Buuren, Afrojack and UK house music master Carl Cox. In addition to these big names in gaming, Electric Zoo 3.0 will also shine the spotlight – literally: Expect a dizzying display of lights – on up-and-coming DJs such as Kyle Walker, Wax Motif, Sidepiece and the Queens native CID .

While Central Park will always be the heart of SummerStage, this year’s festivities will take you all over the city to soak up the sounds of the season. Jazz legend Herbie Hancock will officially open the proceedings with a free concert in Central Park on June 11, organized in association with the Blue Note Jazz Festival. Central Park will also host benefit shows featuring indie rock band Modest Mouse (June 8), George Clinton and Parliament-Funkadelic (June 15) and singer-songwriter Andy Grammer (August 4). For “Bird” lovers, the Charlie Parker Jazz Festival will take place everywhere from Marcus Garvey Park in Harlem to Tompkins Square Park in the East Village from August 26-28. And R&B icon Stephanie Mills will headline a free show at the Coney Island Amphitheater in June. 25. Dance troupes – including the Dallas Black Dance Theater at Brooklyn’s Herbert von King Park on July 22 – will twirl through the city as part of the festival.

Shakespeare in the park

Last year, professional theater returned to the city after a long COVID-related shutdown with Shakespeare in the Park. This summer, the 60-year-old Central Park institution is back in all its glory with two productions: “Richard III” (June 17-July 17) with Danai Gurira of Marvel’s “Black Panther” as that title king; and a new musical version of the comedy “As You Like It” (August 10-September 11) from talented composer Shaina Taub, whose “Suffs” is currently playing at the Public Theater downtown. Tickets to Al Fresco Shakespeare are free and there are many ways to get them (a daily in-person giveaway, a queue and a digital lottery). Unlike Broadway, you will need to show proof of vaccination to enter, but face masks are not required.

These outdoor screenings combine independent films with parties – sometimes even after-parties. Events take place at unique locations dotted around the city, not all rooftops – past locations include Greenwood Cemetery and the top of the Old American Can Factory in Gowanus – and often kick off with drinks and music live. Fun titles this year include “Fire of Love” (June 15), a documentary about a couple volcanologists; “Memoria,” a Tilda Swinton-directed film from Palme d’Or-winning director Apichatpong Weerasethakul; and “I Love My Dad” (July 3) with Patton Oswalt.

Get your spritz on at this nationally touring hard seltzer festival at Pier 36 in lower Manhattan, where drinkers can sample more than 100 sparkling flavors. Expect crowd-pleasing products like White Claw and Mike’s Hard Lemonade Seltzer as well as other novelty brands like Vizzy, BuzzBallz and Topo Chico Hard Seltzer on tap. Attendees can also indulge in snacks from rotating vendors, to be announced soon, and plenty of Instagram-worthy photo moments.

Lincoln Center’s Summer for the City

With more than 300 events from May 14 to August 14, the Lincoln Center for the Performing Arts seeks to breathe new life into New Yorkers. “One of the most basic jobs of the arts is to help heal,” artistic director Shanta Thake said in a press release. “This summer we will do just that, with times to rejoice, reclaim and remember in a transformed city.” “The Oasis” dance floor installation will get revelers moving their feet to salsa, swing, bachata, merengue and more. The ADB! The Bronx Academy of Dance will present the Mini Kiki Ball for Pride Month and later in August there will be the BAAND Together Dance Festival. And on July 10, couples “whose weddings have been canceled or diminished due to the pandemic” are invited to re-do “the ritual alongside hundreds of other New Yorkers, with live musical performances, a ‘second dance’, desserts and a reception on the dance floor,” according to the statement.

Popular music festivals get support from the Welsh Government